James Gallagher is a golfer who happens to have Poland Syndrome. The 55-year old has been used to playing golf, and living life for that matter, with a disadvantage. Born with Poland Syndrome, Gallagher’s left arm is shorter and weaker than his right. He’s also missing a left pectoral muscle and without a knuckle in his left thumb. 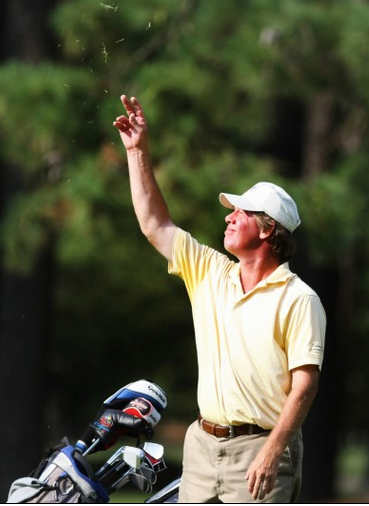 Gallagher grew up with an adopted family, and he said he was a natural with a golf club. He was on the verge of turning pro in 1981 before he suffered a knee injury playing basketball. In need of money to pay off students loans, he enlisted in the Air Force. He didn’t play golf again until 1994.

Gallagher, who lives in Yorktown with his wife Debbie, is preparing to play in the Senior British Open later this summer. Gallagher also qualified for the British Open in 1999, but was unable to play because he was needed in Kosovo at the time.

Before he heads overseas, Gallagher is enjoying the now.

“I just played 18 holes of golf with Steve Liebler and Adam Horton. Steve and Adam are top-notch golfers in anybody’s venue,” he said, at this point starting to choke up. “To be able to go out and play golf with them, it’s not just fun, it’s a feeling of satisfaction that I’ve beaten this…. I win. I didn’t let it get me.”