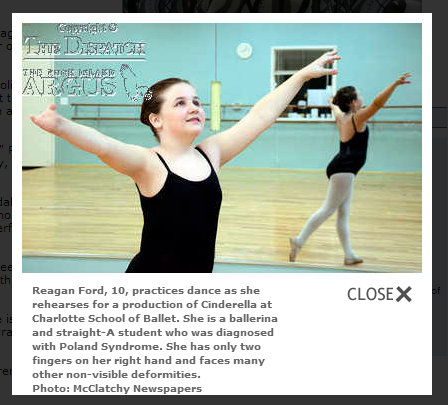 At birth, Reagan Ford was diagnosed with Poland syndrome, a condition that caused three fingers on her right hand to not develop.

She calls it her Nemo hand: One of her “fins” is shorter than the other, she said, just like the main character in the animated film, “Finding Nemo.”

Aside from the noticeable physical differences, Poland syndrome also left Reagan without a pectoral muscle or pericardial sac (around her heart) and with ribs that did not connect, said her father, Brett Ford.

But the birth difference doesn’t seem to slow Reagan down. She has lived by the motto her grandmother once told her: “God made me special,” Reagan said.

Now a 10-year-old student at St. Ann’s Catholic School, in Charlotte, N.C., Reagan has been dancing at the Charlotte School of Ballet for five years, and has been a part of the Charlotte Children’s Choir for three.

She has covered a wide variety of dance – dabbling in ballet, modern, hip-hop, jazz and tap. And though practicing is not her favorite, she loves to perform in front of audiences, she said.

“She has to have some form of therapy to keep her arm strong, and dance helps work on that strength,” said her mother, Madonna Ford.

Aside from her extracurricular activities, she is a straight-A student and participant in the Duke TIP program for academically gifted youth.

“She’s not any different than the other children,” her mother said.

From a very early age, Reagan figured out innovative ways to do basic skills, her mother said. Tying her shoes, forcing herself to be left-handed so she could write, and cutting with scissors were all tasks Reagan taught herself.

“At first, when I was learning to tie my shoes, I looked at a book my baby sitter had,” Reagan said. “But it was easy.”

Reagan said she often enjoys spending time working on projects with her dad in their garage. Brett Ford constructed a special glove that allows Reagan to hold and hammer nails.

“We made a wooden house, but I forgot to make a doorway,” Reagan said, laughing.

“We always find a way,” her father said.

He constructs special gloves Reagan needs for dance recitals, too, as well as winter gloves for her.

So far, he has crafted about four gloves for dance performances that allow Reagan to hold props. Her most recent glove was for “The Nutcracker,” in which she had to hold a drumstick.

The most difficult part of the performance was trying to keep a serious face as a drummer, she said. “I always have a huge smile on my face.” She danced in six performances of the ballet.

Reagan said one of her dad’s more crafty inventions allowed her to hold a jump rope in gym class. With the help of a sweatband, she was able to tie the rope to her hand and work out with the group.

In her lifetime, Reagan has gone through about a dozen surgeries. More will be needed as she matures, Brett Ford said.

“One time it was really scary because I heard the doctors talking when I was in the surgical room, but then I fell back asleep,” Reagan said, remembering being placed under anesthesia before surgeons operated on her hand.

While she says surgeries are difficult, the one struggle Reagan says she deals with more often is bullying. Because some of her classmates don’t understand her disability, they often pick on her, she said. She thinks back to a day at school when her class was playing baseball-tennis and two girls were mean to her.

“Some days it has her down, but for the most part, she lets it roll off her shoulders,” Ms. Ford said.

Reagan says she often provides a listening ear to classmates and enjoys helping them solve small disputes. “She’s the mediator and psychiatrist,” said her mother.

As for the struggles ahead, Reagan said she takes her mom’s advice: “You can’t give up.”