Poland Syndrome Fathers are not a group of people we hear from very frequently so we were delighted when John agreed to share his story about his daughter Baylee.

On April 23rd 2012, at 4:41am, a beautiful baby girl was born. Crying, and crying and introducing her brand new lungs to the atmosphere of our Earth. She was taken by the nurses, promptly wiped and cleaned of amniotic fluid. She was then placed on her mother’s chest where I instantly fell in love. She was so beautiful from the first second and first minute that she was alive. My daughter, Baylee Nicole Trupp, was born.

It wasn’t until about her 3 month check-up where her paediatrician, Dr. Elinor Zorn, informed me, that my daughter was born with a rare genetic disorder, known as Poland Syndrome. I had never heard of it, so I didn’t know what to think. I was scared.

She was born with ten fingers, and ten toes. She was also born without her right pectoral muscle, as well as having the index and middle finger fused together by webbing. I would’ve never noticed it, in my eyes, my beautiful girl was as perfect as can be. I instantly began my own research into information on Poland Syndrome. 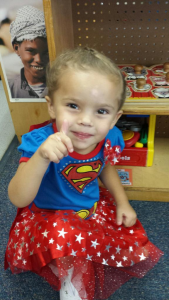 A rare disorder where somebody is born without or undeveloped pectoral muscles, as well as experiencing other difficulties with their hand on the same side of their body. At first I didn’t think anything of it, the paediatrician informed me that Baylee’s case was very minor and easily repaired.

It wasn’t long until we started discussing surgery to remove the syndactyly on her right hand. The syndactyly was very minor, but was affecting how Baylee’s fingers were growing, and was causing her index finger to pull in and curve towards her middle finger.

It was only a few months later, that I had taken Baylee to Valley Children’s Hospital in Merced, CA. I was very confident and very happy that I was referred to this hospital, because I had myself been helped and diagnosed at Valley Children’s. So I knew I could trust anyone with the care and handling of the most precious thing in my life.

The surgery was performed, and I impatiently waited in the waiting room, staring at a TV screen that had operation updates on it. I sat watching the screen go from pre-op, to surgery, to recovery. It wasn’t long after Baylee had been taken into recovery, that I was called to go into recovery for her.

I followed the nurse to recovery, where I was sat down in a chair, and was told Baylee would be brought out shortly.

Soon enough, my daughter, my world, my everything, was brought to me in the same hospital gown she had been taken in, but instead, with a yellow cast on her right hand. It wasn’t long before the doctor came, and told me that the surgery had went great, and as smooth as possible. I was so relieved and happy, knowing everything was okay.

It was easily the scariest moment, I had ever experienced in my entire life, knowing that my baby girl was going to be taken, put under anaesthesia and operated on.

Thank you to John for sharing his Poland Syndrome Father’s story with us. We know there are lots of Poland Syndrome Father’s out there who will appreciate hearing from you. Sharing experiences of living with Poland Syndrome is something we’re very keen on at PIP-UK. If you’d like to share your story it’s really easy. Just send an email to pip.charity@gmail.com with what you’d like to say and any pictures you want included. We’d love to hear from you. We recently were contacted by a family who told us reading our stories has really helped them feel a lot calmer so we know it’s important to share.