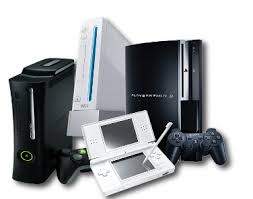 I never really gave a thought to computer game playing and my son, as most parents these days I just hoped he would be more interested in keeping active. But I do remember coming across a cruel picture of a playstation controller with one tiny handle and one large handle, it was a cheap jibe at Jeremy Beadle. I remember being annoyed about people making a joke of it, I hoped that my son would overcome holding a playstation controller as he would all other challenges so far, in his own way. I put it to the back of my mind hoping it would be a long time before we had to think about that. I think this picture weighed more heavily on my husband, an avid gamer, I gave him a playstation 3 as a gift just before George was born and I think he saw playing games with his son as one of the lovely rights of passage between father and son. He is now six and sometimes to my dismay, he is too  avid a gamer, I don’t remember exactly when he started to play, probably around 2 years ago and he just picked up the controller and got on with it. Sure his little hand sometimes struggles and he hits the wrong button, but its fine and nothing can come between him and  his lego and football games! The Wii is a whole other story, we never had one so I didn’t think anything of it until we went to play at a friends house one day and he was getting really frustrated with the Wii controls. The games required two hands and the controls mean your fingers are spread quite far apart and until recently his hand was just not big enough. Thankfully his hand grows just like the rest of him, constantly! He has now mastered the fine art of Wii controls and loves it.

He has recently become obsessed with rock music and started playing rock band and guitar hero. Its quite tricky to master the guitar controls, and he has gotten quite upset and frustrated, he automatically thinks he will be Axel Rose as soon as he picks up the guitar. We’ve played with him and encouraged him to keep trying, we discovered you can do a lefty-flip so he can do the tricky controls with his big hand and he’s getting there now. Now he’s older I don’t so much worry about whether he will be able to do things, I know we will always find a way. I prefer to revel in the way he struts and move and has music in his soul, I love my boy.

I’d be interested to hear your gaming stories and work arounds you have found.